Nestled on the banks of the Fox River and used annually by tens of thousands of people, the 9-hole regulation Pottawatomie Golf Course, which is owned and operated by the St. Charles Park District, is certainly the most beautiful golf course in the Fox Valley area offering scenic views with lush landscapes along the shore of the Fox River.

As the only 9-hole public golf course for the St. Charles community, Pottawatomie is a quality golf course that provides golfing opportunities for all ages and abilities at an affordable price.

Originally designed in 1939 by the pioneer of golf course architecture, Robert Trent Jones, Sr., who capitalized on the course’s location along the banks of the Fox River, it is here you will find his first island green design on hole 3. 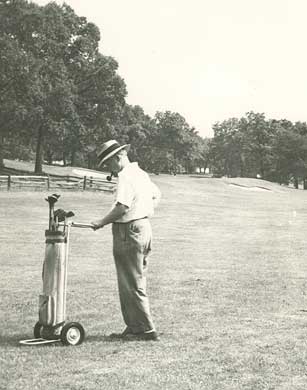 The golf course was constructed on 42 acres of land north of the pool complex in Pottawatomie Park. Much of the land, at the time valued at $50,000, was given to the Park District by the Lester J. Norris Family. The Park Board hired Robert Trent Jones, Sr., one of the premiere golf course architects in the United States, to design the course. He began work in May of 1936 to design the finest 9-hole facility possible, designing a scenic course using the property’s woodlands and the adjacent Fox River to its full extent. He was quoted as saying that the 9-hole, 3005 yard, par 35 course had an “exceptionally fine” layout.

The course, which was the final project of Pottawatomie Park’s Works Project Administration (WPA) development project, opened for play on Saturday, July 1, 1939. Opening day fees were 25 cents for the first round and 15 cents for each additional round. Rates were higher on Sundays.

Throughout the years, the golf course has been renovated and improved. While staying true to Jones’ original course design is always a priority, certain modifications have become necessary as the course becomes more and more popular.

In 1976, the District installed an irrigation system.

In 1987, most of the greens were re-constructed. 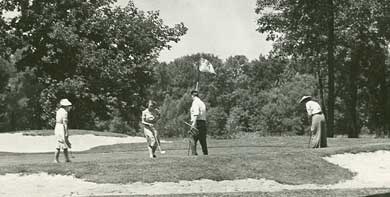 The 1990s produced a boom in golf course construction elevating quality standards to a higher level. For Pottawatomie Golf Course, a 9-hole facility, to compete in an 18-hole course market, the District needed to embark upon a significant renovation project.

Over a six-year period from 2000 to 2006, the Park District planned the golf course’s improvements with the goal of accommodating golfers of all ages and abilities on safe and well-maintained grounds while remaining sensitive to the heritage of the facility and its original architect. With nearly 40,000 players enjoying it each year, the course is used much more than Jones ever could have imagined.

The ultimate goal was to systematically make improvements to the golf course. It was a deliberate process orchestrated by architect Martin Design of Batavia, Illinois with assistance from golf course architect Jim Spear, Christopher B. Burke Engineering, and T.J. Emmerich Associates, Inc., irrigation consultants.

The major projects undertaken include: 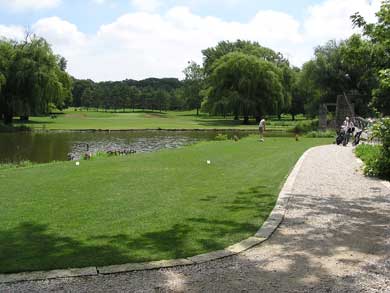 There was extensive native vegetation planting leading to holes 3 through 7. Staff restored the buffers around the existing lagoon with native plants, which aided in the filtration of fertilizers and pesticides from run-off. Native plants have a greater fibrous root system to help naturally purify the water before it reaches the Fox River. Plantings provide a more natural habitat for various animals found at the golf course including deer, foxes and egrets. In order to enrich the aesthetic views of these areas and maintain the District’s Audubon Cooperative Sanctuary status, staff removed invasive non-native vegetation such as canary reed grass and purple loosestrife.

Limestone flagstone was used to line the cart paths which contributed to being environmentally sensitive in the flood plain area. Instead of asphalt, the cart paths were filled with gravel and screenings that are natural products.

Retaining the original course design was only part of the challenge faced by the Park District. Keeping the course looking verdant and lush is largely a function of the underground sprinkler system, which was in dire need of an upgrade and redesign, so the first phase included the installation of a variable frequency drive irrigation system. A new pump which draws water from the District’s well replaced the previous mechanism that took water directly from the Fox River, which brought in huge amounts of silt, clogging the sprinkler heads and caused much difficulty in growing healthy turf. The new system has the ability to regulate the amount of water distributed to specific irrigation sites, which enables the District to conserve water and pinpoint coverage areas. The new irrigation system has decreased the maintenance costs dramatically.

The next phase of the project was the installation of new sprinkler lines that upgraded the existing single-row system with a double-row system that places sprinkler heads to the outer edges of each fairway. This provides a more efficient coverage pattern and allows the roughs and the fairways to be properly watered, producing healthier turf. 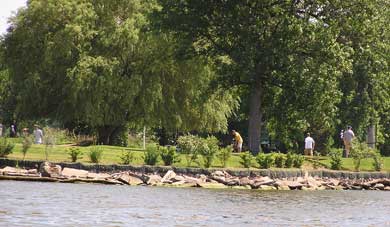 As more and more of the riverbank washed away over the years, this integral part of the course’s history was on the brink of being lost forever. To remedy the situation, the golf course launched a shoreline stabilization project, a civic and engineering collaboration between the St. Charles Park District, the Kane-DuPage Soil and Water Conservation District and the U.S. Army Corps of Engineers. Working to stabilize the bank and prevent further erosion, gabion baskets — large, connecting chicken-wire baskets filled with rocks — were installed as retention walls along the riverside at hole 4 to the tee box on 5. Topped with horticultural cloth imbedded with native plant material, these walls secured the riverbank while providing a fertile habitat for native wildlife. Further landscaping, using plants such as native viburnum and red twig dogwood, extended the natural buffer between land and the river’s edge.

In 2020, the District embarked on another shoreline stabilization project, this time to preserve the picturesque island green that draws so many to the course.

A 218-foot timber wall was built to stabilize the east side of the island green that had been eroding into the river for a number of years. Caused in large part by floods and boat traffic, the severity of the erosion had reduced the footprint of the island. The scope of the project also included regrading, installing sand bunkers and landscaping.

In 2019, staff unveiled a carved, wooden sculpture beautifully-crafted by sculptor Mike Bihlmaier. Ode to the Old Oak is a testament to the work staff does to maintain its Certified Audubon Sanctuary status.

Pottawatomie Golf Course has a long and proud heritage. It is a unique property, blessed with an abundance of natural features and the prominence of the Fox River. The District is very proud of the fact that renovation work remained sensitive to the integrity of the golf course while meeting the needs of today’s golfers.

Powered by RecCentric
Scroll Up